Ah ha! Now we’re talking, TCM! After the dud that was She Freak this was a breath of fresh air. Don’t show me bland grindhouse remakes. Show me campy and fun horror and science fiction hybrids instead. I like those.

It’s 1906 on some god-forsaken mountaintop in China. Professor Saxton and his crew come across the remains of an ancient frozen man in a cave.

If it were me, I would have left him there. Seems cozy.

Like any good scientist he shoves it in a wooden box, padlocks it shut and takes it with him to the train station. While at the station he meets up with an old rival/colleague, Dr. Wells and his assistant Miss Jones. While they’re dealing with the irritating ticket man, a thief on the platform unlocks Saxton’s box. He’s found next to the crate by the train staff, dead as a doornail, his eyes completely white. Saxton doesn’t give a damn (he was trying to steal his mystery man after all), but the creepy monk disagrees, saying whatever in the box is “unholy and must be destroyed.”

Of course, all frozen ape-men are evil, but as a rule, you should never listen to anybody who looks like Rasputin.

When asked what’s in the box, Saxton just replies “fossils” and leaves it at that. Everything is boarded and they head off. Wells wants to know what’s inside the box, but Saxton won’t tell him. So, once Saxton leaves, Wells bribes the baggage man to take a peek. He gets a peek and leaves the room to get a light, since, you know, the inside of boxes are dark and all. While he’s gone…

He comes back just in time to try to keep it in, but, well, it doesn’t end well for him. Inspector Mirov goes looking for him, but the baggage man can’t be found. What he does find are screws next to the mystery box, which is again padlocked shut. Mirov calls Saxton and they open the crate.

Finally Saxton spills the beans and admits that it what was in the box wasn’t so much a fossil as it was a 2 million old man-ape. Dr. Wells responds with the most obvious, “Are you telling me that an ape that lived 2 million years ago…got out of that crate, killed the baggage man and put him in there…then locked everything up neat and tidy and got away?”

Mirov sends his men out to look for the thing, but tells them to keep it quiet. Can’t panic the passengers after all. You can imagine how well that works out.

Wells is called in from the dinning car to do an autopsy and finds something creepy. 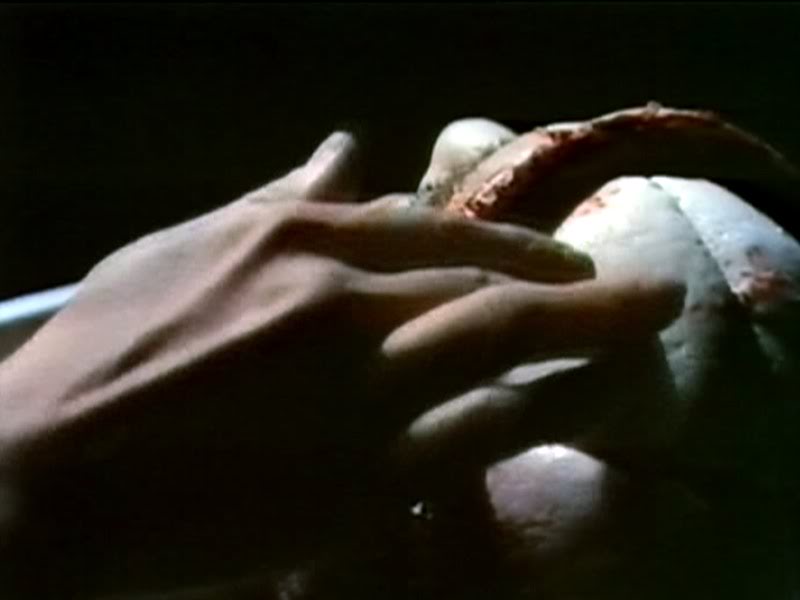 The victims brain has turned smooth, all the wrinkles are gone. He deduces that the mans memory has been removed (I don’t know how he made that jump in logic, but okay, doc.)

After killing another passenger, the creature is shot and killed by Mirov, but not before the inspector looks into it’s fiery red eyes and nearly dies himself.

Unfortunately after that the killings don’t stop. The rest of the movie is spent trying to figure out what the hell is going on, how the creature can still be alive, and what it’s motives are. As you can imagine, everything quickly starts going to hell. And then the Cossacks show up, led by the flamboyant Captan Karzan, who’s hell bent on finding the killer, even if he has to whip a monk.

Random Cossack: But he’s a monk.
Karzan: We have more monks.

Let me start off by saying that I really liked this movie. It was fun and campy and, while the characters my have been acting seriously, the film retains a lighthearted flair.

There is a lot of science talk in this movie. It’s all described in layman’s terms, but anyone with a basic middle school education will realize that most of it doesn’t make a damn bit of sense.

Actor: “Look at these random drops of blood from the creatures eyes! They’re
like still frames for everything it’s seen! Awesome!”
Veiwer: Um, no.

But that’s okay. Some science fiction type movies like to shoot for realism. This film isn’t one of them, so for me it gets a pass. If stuff like that bothers you though, just repeating to yourself 1906, 1906, 1906…..

The actors though, is where this movie really shines.

Why is that guy behind them making that face? Do they smell?

Having these two together is really a joy. They have a rapport that’s calm, natural, and just entertaining has hell to watch. Plus, Cushing is great as the comic straight man. When one of the passengers tells him that anyone on board could be the creature he replies, “One of us the monster? We’re British you know.” Love it.

But I must admit, I love none more that Captain Karzan, for whom did they pick to play him but 1970 badass, Telly Savalas.

The first time you see him he’s in a train station under a fur blanket with a woman who I’m sure was listed in the credits as “random bed chick”. Once he’s on board the train he proves his prowess by yelling at all the passengers, having his men hit Saxon and Wells, and calling everyone peasants. Well, everyone except one particular passenger. He’d prefer to just make passes at her. 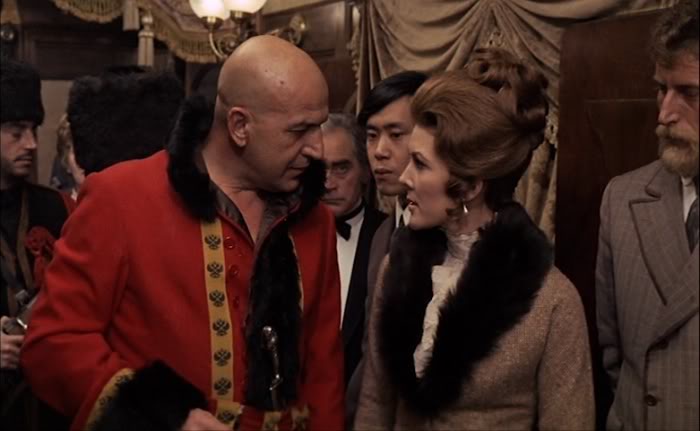 “Who loves ya, baby?” *Note: Yes, I put this picture on here just so I could write that. What of it?

He’s on screen for a relatively short amount of time, but he makes sure to make an impression in what little screen time he has. His performance really adds to the campyness factor and I Ioved every second he was on screen. 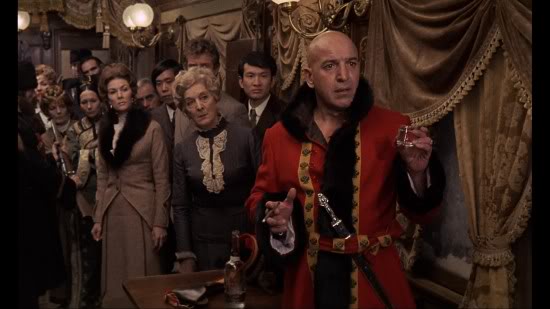 I’m going to kill this creature…. But first, a drink!

Horror Express is actually a Spanish Horror film, filmed in Madrid and cast with mostly English actors. It was filmed with a small budget, but had the benefit of three familiar leading actors. The movie was filmed without sound. The effects and voices were dubbed in later, with Lee, Cushing and Savalas providing their own voices for the English market.

The movie passed pretty quickly into the public domain and had frequent TV airings in the 70’s and 80’s. Yet despite that, believe it or not, it has a pretty decent Bluray release.

Overall, I really enjoyed this movie. It brought a smile to my face. Sure, the plot (and the science) is corny and convoluted as all hell, but it’s got some really memorable sounds and imagery and the movie moves along at a good pace. It was a fun ride and I had a good time. I may just pick this one up later.

It has also been released on DVD and Bluray.