Dolly Dearest is the story about a toy maker who uproots his family and moves to Mexico after he purchases an old derelict doll factory with the intention of mass-producing the hottest doll craze in recent memory (So, Cabbage Patch Kids?): Dolly Dearest.

Unfortunately, he buys this amazing factory sight-unseen (the dumbass)…

…so naturally he doesn’t know about the ancient Sanzia excavation site less than 100 feet away, nor that an archeologist died a couple nights ago after inadvertently releasing a 900 year-old ancient evil that found its way into his new doll factory in the form of red, glowing, spastic, squiggly lines. 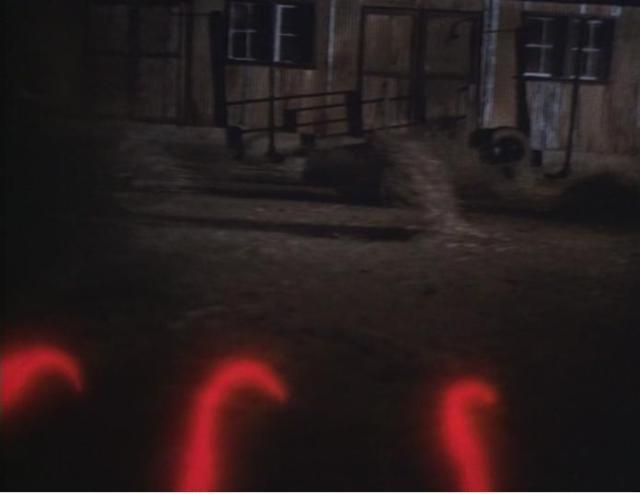 This is the first thing we see after a rather nice jump-scare, immediately negating any good
karma received from said jump-scare.

Of course, once his daughter, Jessica, is given one of the dolls that her father will mass-produce in his new Mexican sweatshop, strange things start happening to the Wade family.

This movie is a nice double whammy because it has creepy dolls and creepy children….Okay, there’s actually only one creepy child. The other one is just inflicted with that inevitable horror we all face known as puberty. So while he may not try to stab anyone, he still has his own issues.

So many, many issues.

There are several noticeable similarities here between this movie and Child’s Play, but there are also several differences. For one, Dolly doesn’t spend a lot of time talking. She does give one short speech, but the rest of the time she’s muttering to herself more than anything, as opposed to a certain characters snide, snarky comments and overt death threats.

The main kids are also quite different. While Andy eventually realizes that Chucky is no good and becomes fearful of his new, killer doll, Jessica and Dolly’s relationship leads more towards the possessive. Seven-year-old Jessica, uprooted from all her friends back in the U.S., is immediately possessive of her new doll, and the evil little piece of plastic uses this to her advantage and ends up possessing the girl, turning her into a little, blond accomplice.

Also, Dolly Dearest focuses less on the doll and more on how the doll effects Jessica, and in turn how those changes effect her family. Jessica starts lashing out at anyone who tries to separate her from the doll, pushes the housekeeper when she notices she has a rosary and starts drawing violent images. And all the while, mom is the only one who notices or seems concerned about these changes, causing a rift between her and her husband, who seems to think mom is the one with issues and everything else is perfectly normal.

I beg to differ, sir.

I think one of the bigger drawbacks for me what how they portrayed the doll. Dolly is most effective and at her creepiest when she’s just in ‘Dolly’ form. Just the subtle way her eyes move or the slight turn of a head is really enough to give anyone a doll phobia. It’s an illogical action sure, yet it still seams remotely plausible. But then you go and loose some of that once the doll starts looking less like a doll and more like someone who’s had a two-pack a day habit for the last forty years. 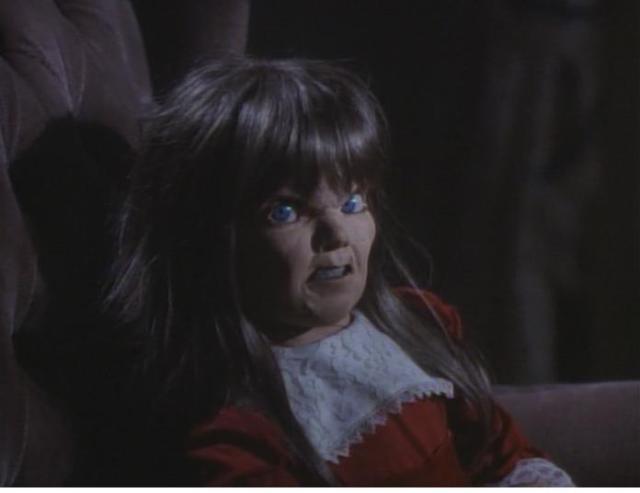 Dolly Dearest was pretty much a direct-to-video film (it had a limited theatrical release), so I expected a lot more cheesiness and cut corners, but it didn’t end up being as incompetent as I expected. It has a rather decent cast (Hello, Rip Thorn!) and while some of the special effects were bad (see squiggly lines above), the dolls animations were actually pretty good, considering the budget.

The biggest flaw with Dolly Dearest is that it’s just not engaging enough and, for a slasher, has a very small kill count (3) and an even smaller pittance of gore. But I think the films biggest sin is that Dolly just doesn’t have enough presence. It showed promise, but they didn’t follow through with the character, leaving Dolly to fall and disappear into the shadow that is Chucky and that crazy ass statue from Trilogy of Terror. You can tell the creators were at least trying to make something good, but what we ended up with is a mediocre slasher that isn’t quite good enough to be good and not bad enough to make a drinking game out of it. But hey, it has its moments and at least they tried.

If you like the creepy child/doll horror sub-genre, feel free to give this a try. There are worse ways to spend your time watching various Child’s Play rip-offs.

Dolly Dearest is currently available for streaming on Amazon Prime.

It also looks to have received a DVD at some point, but that sucker might be too expensive for most.