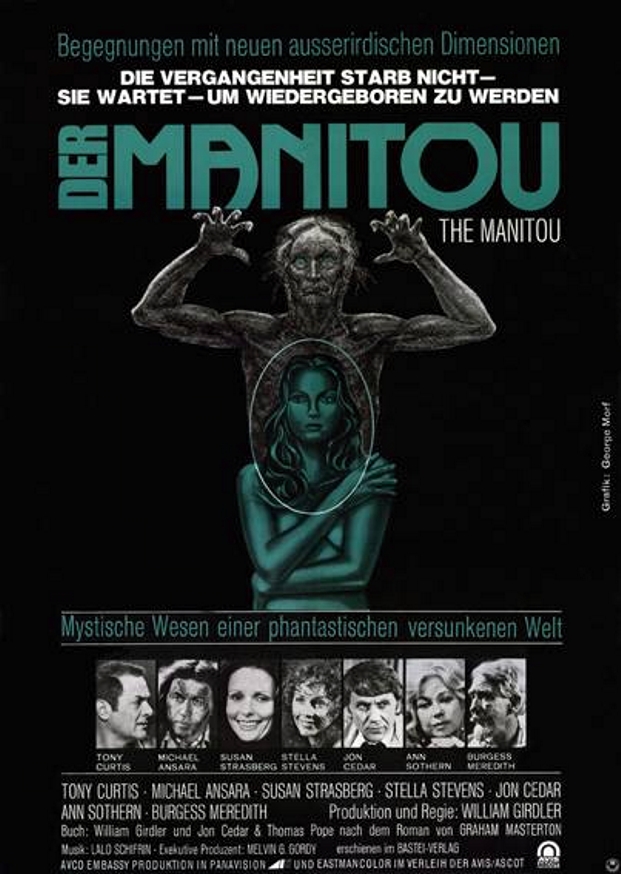 The Manitou is the story of Karen and Harry. Karen has a bit of a problem. Seems there’s this fast growing lump on the back of her neck that twitches even when you don’t touch it. The doctors initially just assure her that it’s a tumor (not that having a tumor on the back of your neck is all that assuring….), but since it’s grown to the size of a golf ball in the span of three days, they’ll have to get it off quick or risk it causing her more harm.

After that bit of unsettling news, Karen goes to see her beau Harry, a low on the totem pole psychic who plays creepy music and wears a fake mustache to impress his clients.

That night, Karen mutters something unintelligible in her sleep. Harry doesn’t think too much of it, until she mutters the same thing the next day on the operating table and the surgeon in the room ends up reluctantly using the scalpel on his own hand.

Harry is convinced that something’s wrong, but the doctors choose to go ahead and try the procedure again, this time with a laser treatment scalpel. I’ll let you draw your own conclusion on how that ended.

Things take another dark turn when our inspiring boyfriend has a frightening encounter with one of his clients, a woman who subtly informs him that things are actually much worse than he thinks they are. And by subtle, I mean she floats down the hallway and awkwardly chucks herself down a flight of stairs.

Really now. She’s 90. The evil thing could have given her some dignity and made her trip of a flat surface. It would have been just as effective.

After Harry drums up a fellow (legit) psychic, a séance is performed, interviews and investigations are conducted and the truth is finally revealed. Turns out the horrible thing on the back of Karen’s neck is not just a tumor (after that showy death it better the hell not be). No, that would be too mundane.

Yep. That’d be my reaction, too.

And not just that. No, it’s the quickly growing fetus of a 400 year old medicine man who wants to avenge his people by destroying a good chunk of humanity.

Of course, by the time Harry finally finds a Sioux shaman willing to try to counteract all of this he’s a bit late to the party and the evil medicine man has already revealed himself.

Hey Karen! I had to bribe him with money and tobacco, but I finally found someone who’s willing to hel-…. Well, fuck

And let me tell you, Mr. Medicine Man is PISSED. Not only did everyone try to lop him off before he was ready to hatch (there’s really no other word for that scene), but turns out that the multiple x-rays and the radiation they emit do not do a fetus good, 400 years of evil experience or not.

Ew. Dude, go back in. I don’t think you’re done baking yet.

Am I supposed to be scared or laugh at this scene? I’m not sure.

It’s a veritable hell in the ICU and all the while, Harry and the Shaman are running around in circles trying to figure out a way to defeat someone who’s said to have the power to move mountains.

I’ve got to give The Manitou props for it’s originality. It’s kind of an Exorcist rip-off, but that’s really the closest comparison I can make: A poor, innocent soul is being taken over/hijacked and it’s up to a small group of people to help save her. But that’s really only true for the first half of the film and that’s where the comparison ends. By the second half, things start getting kind of crazy and by the end the film sort of degrades into a more “What the hell is going on!” type of vibe as opposed to its earlier, more serious undertones.

The acting is what you’d expect to encounter in a film like this. While there are no particularly bad cases, everyone is pretty mediocre, with no standouts. Even Tony Curtis doesn’t seem all that into his role, a pity, as the film is primarily centered around him.

The special effects are a bit wide ranging. The film is undoubtedly at it’s best with the physical effects. The old lady floating down the hallway, the séance scene where a head slowly emerges from the table, the ‘hatching’…This is where the film shows some true ingenuity and creativity. And then you see things like the ‘winter’ scene in the ICU, where the ice looks like it was hastily carved out of a piece of foam and your awe dwindles slightly.

The film also has a lot of digitized effects, especially towards the end, but considering this is a movie from 1978, I think it’s safe to say that all of those effects are very…. Well, let’s just say they’re all very 70’s, and looks very cheesy by today’s standards.

On the plus side, thanks to all those cheesy 70’s effects, the movie also ends with one of the most psychedelic, topless, space themed, laser finger, LSD laden trips I think I’ve ever witnessed in cinema.

In the end The Manitou rides the center line of horror movies. It’s not great, but it’s not awful either. Its got a couple cool effects, but the crazy plot might turn a few people off. So if you’re a horror fan who’s more drawn to or leans towards the B-side of the industry, or if you like a little craziness in your movie endings, than look more into The Manitou. Just don’t expect too much.

The Manitou is based on the novel of the same name by Graham Masterson, a British horror author. It’s the first book of six (yes, six) in the Manitou series, which spans from 1976 to 2009.

The Manitou is available on a variety of streaming services.