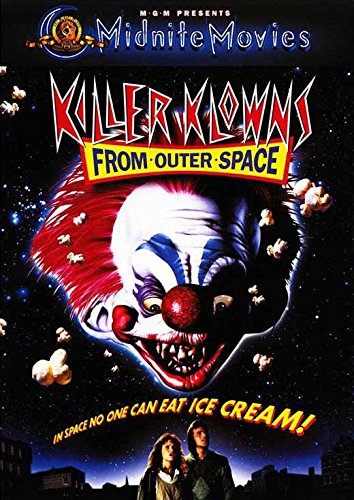 A couple of collage kids macking out at the local lovers lane stop their smooching when they spot a shooting star in the sky and decide to follow it. After committing an act of trespass, they finally find the object from the sky, but instead of finding an asteroid, instead they find an oddly placed circus tent that looks like it sprung up right in the middle of the woods. 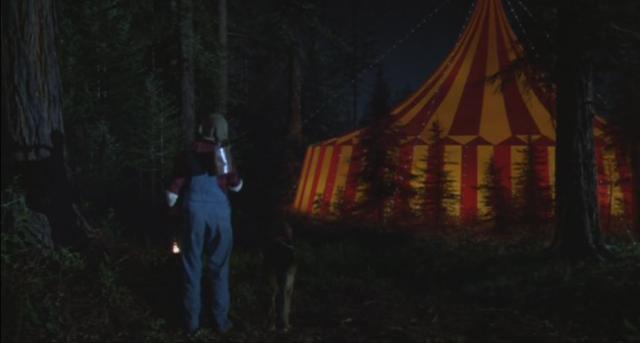 Displaying a lack of common sense that would make someone with an IQ of 10 facepalm, the guy manages to convince his reluctant girlfriend to tag along….or he’ll just leave her out there in the woods by herself. What an a$$.

Inside they find a strange reactor of some sort and a room filled with what appears to be sacks of cotton candy. 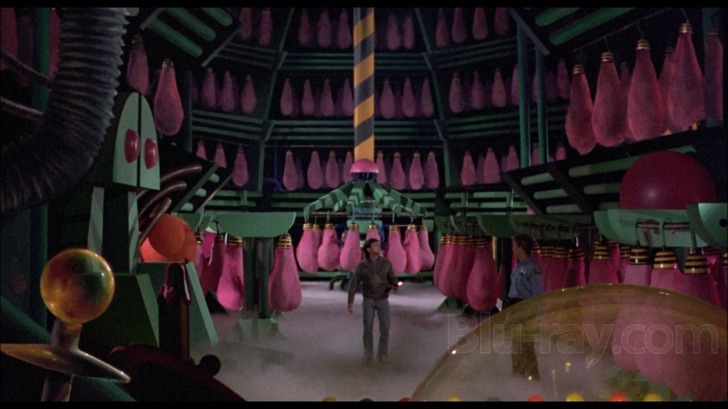 No you dumbass, that’s not how cotton candy is stored. Have you NEVER been to a carnival?

While there, they soon discover the Killer Klowns and just barely manage to escape their clutches before the Klowns follow them into town. 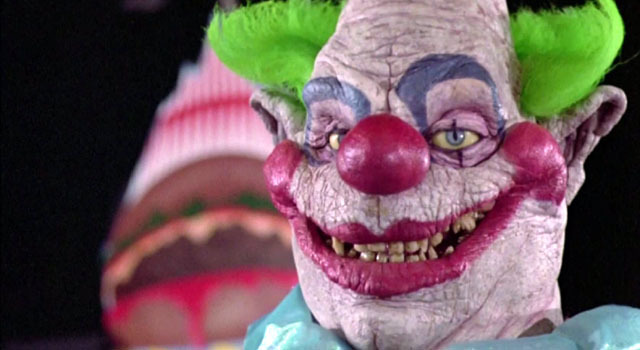 Killer Klowns From Outer Space is a campy blast from the past filled with good practical effects, dated CGI- 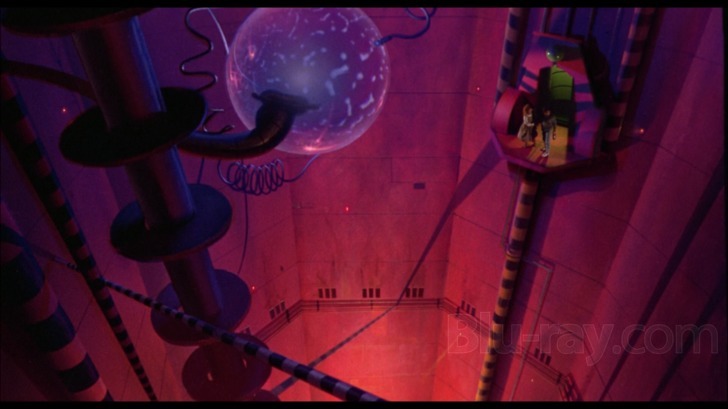 -and a distinctly 80’s sense of humor, including a few very non PC lines that would probably get nixed today in anything that wasn’t an Adam Sandler movie. It’s filled with poor writing, even poorer acting, and is nowhere close to being scary. But to hold all that against it would be ignoring what the movie was trying to do, and what it was trying to do was be nothing more than a fun, campy ride.

Sure the characters are forgettable and the acting is horrible, but that’s not the focus of the film. The focus here is undoubtedly the Klowns themselves and their inventive ways of knocking people off. For such a low budget movie they do a spectacular job of delivering. The detail put into the practical Klown effects are impressive, even by today’s standards. What the creative team of Chiodo brothers might have lacked in story and direction, they more than made up for in creative set and character design. The Klowns themselves are a wonderful combination of cute and silly, yet still manage to maintain a level of creepy menace that an impressive feat for anyone to pull off.

If you weren’t already creeped out by clowns before… 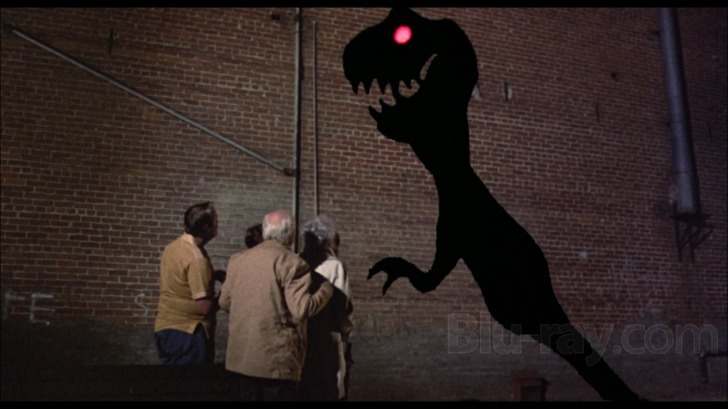 -it still also manages to throw in some deeply disturbing imagery. One Klown tries to coax a girl out of a restaurant while holding a mallet behind his back. Another punches the head of cocky biker clean off his head. There’s also a scene where one of the protagonists is attacked by something that looks like it was taken straight out of a Nightmare on Elm Street film. 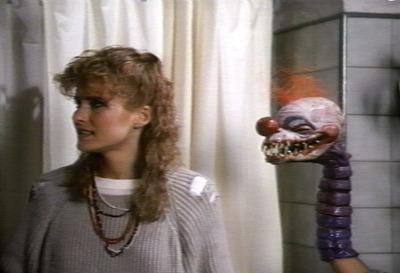 But probably the most disturbing moment is the ‘puppet scene’ in which one bulbous Klown turns the deputy sheriff into a ventriloquists dummy. 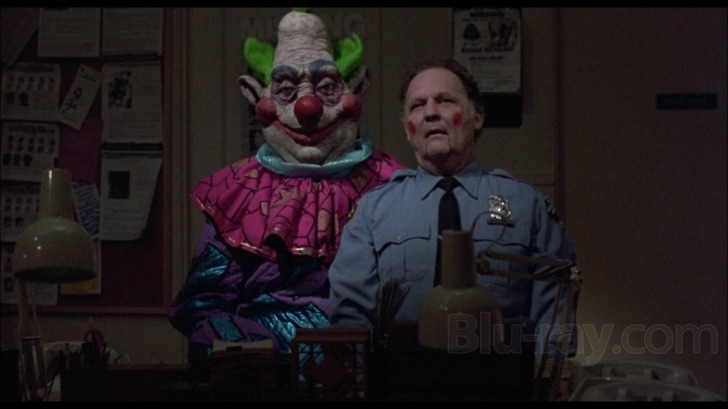 With scenes like this and all the swearing, I’m kind of impressed with the PG-13 rating.

And somehow, despite all of this, the film still manages to add just enough genuine humor to make you laugh. Trying to escape from the house? The Klowns have got you covered. 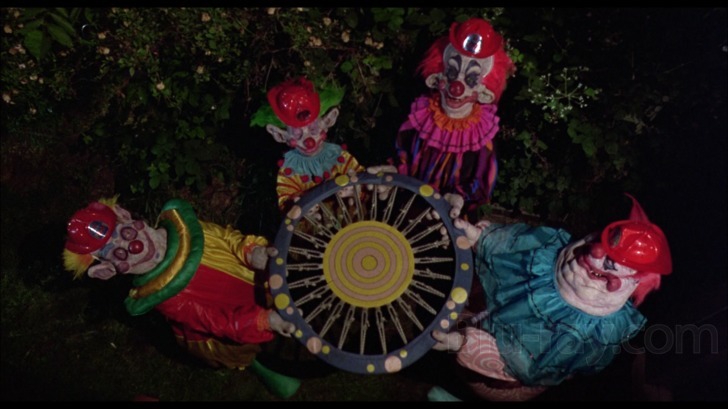 Now there’s an idea for a ‘Hunks of Firefighting’ calendar no one ever wants to see.

Killer Klowns From Outer Space is the type of movie you just turn off your brain and have fun with. The very title itself suggests that it was made solely for the purpose of being campy fun, and in that regard it delivers in spades. Despite its ludicrous premise, its quality surpasses all expectations and at the same time pays homage to the old 50’s drive in monster movies of yore. It manages to be both disturbing and funny and explores the idea of the fear of clowns in a uniquely twisted and wonderful way. For fans of campy horror and sci-fi, this is a movie that deserves a rental. Or, at $7, it might currently be cheaper to buy the blu-ray on Amazon. I hear the transfer is impressive.

Killer Klowns from Outer Space is currently available to stream on Amazon Prime. 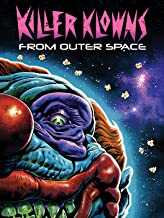 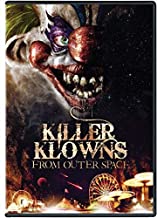 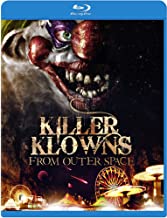 One thought on “Killer Klowns From Outer Space (1988)”